*The venue for this concert is the Aula Maxima, UCC

The City of Cork Symphony Orchestra, conducted by Keith Pascoe is proud to present a concert featuring American virtuoso David Syme, and Australian cellist Ilse de Ziah at the Aula Maxima, UCC on 15 April 2015. Syme will play TWO concertos by Tchaikovsky and Rachmaninoff in the one concert. Ilse de Ziah will play the exciting Khachaturian Cello Concerto as part of her Masters Performance at CSM.

David Syme, American piano virtuoso living in Ireland, has had a long and colorful career. He has performed in Carnegie Hall, Lincoln Center, Kennedy Center, Wigmore Hall, and in major venues in 17 European countries, Canada and Mexico. An alumnus of Juilliard and Indiana University, he was a protégé of the legendary Jorge Bolet. He was schooled in the grand tradition of the great masters, and also studied with Ozan Marsh, Sascha Gorodnitzki, Ania Dorfmann, Louis Kentner and Constance Keene. He has recorded two dozen CDs with such orchestras as the Royal Philharmonic, the Vienna Symphony, and the Czech National Symphony.
“I am delighted to be making my Cork début, at last!”, Syme quips light-heartedly. “Ireland has been my home since 2005, and West Cork is my base. I am thrilled to be playing with an orchestra that has made it to the Guinness Book of Records!”
Since arriving in Ireland in 2005, he has been steadily forging a reputation as one of the finest pianists ever to grace its shores. He is best known there for his “Living-Room Concerts”, held about 25 times a year in his West Cork home on the Beara Peninsula. This series was profiled by Mary Kennedy on RTE Television’s “Nationwide” in 2011. These concerts are social and musical events, with people driving from all corners of the country to attend. One of David’s biggest fans has been the immortal Maureen O’Hara, who prior to her recent move to the U.S., annually celebrated her birthday by listening to him play. Christy Moore, Ireland’s most-loved musician, has been a loyal supporter as well. David Syme performs regularly throughout Ireland and the European mainland as well as in the U.S. 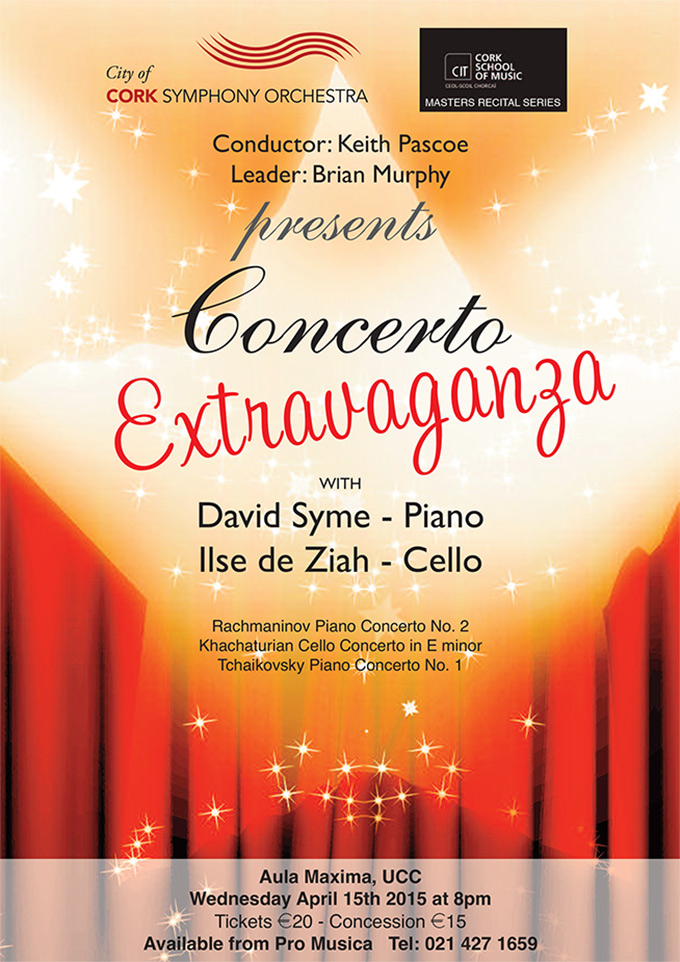